The Ruins constitute an area of The Wilds. The most powerful magic-using Fusions, Fusion Grim and Fusion Hex, reside here. The heart of the infected zone used to be the Hall of Heroes, which has since been reconstructed on Monkey Mountain. After completing Dexter's guide task to bring back the heroic souls Fusion Demongo had ensnared, the player returns here to find a Shadow Fragment. Jack tells the player that the piece previously found there was part of Aku's being, which means that he still could be at large.

During the Mother's Day Event, Drew and Zon were added to The Ruins, helping the hero and Zak find the Mother Blowfish's eggs. Players can also find one of the Secret Snails from Adventure Time on a broken architrave here. 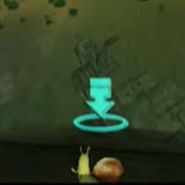 The Secret Snail in The Ruins.