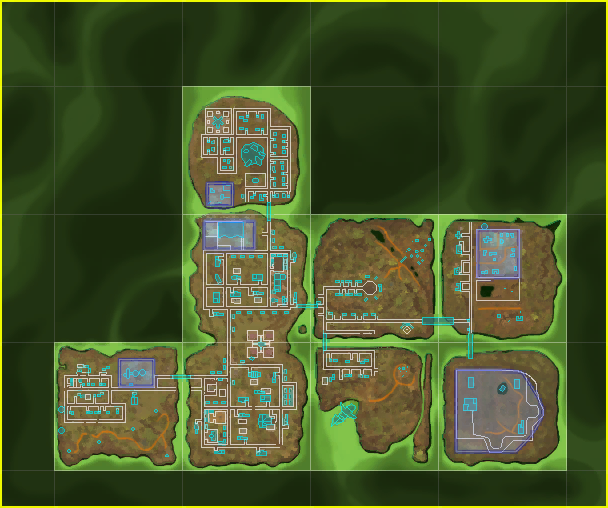 The Future was an apocalyptic time period in the near future where Fuse had nearly conquered the world. Planet Fusion was closer to Earth than in The Past (proven by the "Run to the Future" glitch), and most areas found in the Past were destroyed after having been flooded by a sea of Fusion Matter. In addition, the liquid Fusion Matter seemed to had eaten away at the rest of the surface, putting the infected sea at a lower elevation. Certain areas of the Suburbs were connected by fragile wooden bridges between island-like areas, which are all that are left of the FusionFall universe in its time period.

In the Future, Sector V and more predominantly Peach Creek Commons had become the main hub and base of Fuse's resistance, and also where most special events were held. Most of the transportation systems were destroyed, as the Slider System fell to pieces in Genius Grove; only two S.C.A.M.P.E.R.s and four Monkey Skyway Agents remain for the player's travel. Apart from the Tech Square tutorial, there are just five accessible infected zones with three Fusion Lairs among them, spread across eight areas. The Candy Cove Infected Zone, sunk below the ground, just half of Candy Cove itself eroded from Fusion Matter. On the other hand, the infection in Sector V's KND Training Area, which was the only place not shielded off in the past, grew into an Infected Zone.

When first beginning FusionFall (prior to the Future being removed), the player is thrown into The Future due to an error caused by Dee Dee while testing Dexter's time machine. The player learns that Fuse has almost destroyed Earth, and is given a short tutorial with Computress, Ben Tennyson, and Numbuh Five, on the basics of playing the game, such as running, jumping, looking around, and fighting.

After the tutorial, the player is given a Lightning Gun rifle and is thrust into the middle of the battle of Tech Square, where many FusionFall heroes are fighting for what's left of Tech Square. The player must defeat three Fusion Spawns and a Cyberus, and then complete two Training missions, one for Numbuh Two, and a mission to earn one’s first Nano, Buttercup, by defeating Fusion Buttercup.

After warping out of the Fusion Lair, the player lands on top of Dexter's house, where a Tech Wing stands in one’s way of the means of escape ― a KND S.C.A.M.P.E.R. The player must use the Buttercup Nano to stun the Tech Wing, before narrowly escaping Tech Square as it sinks into the Fusion Matter, taking many heroes with it, including Blossom, Bubbles, Numbuh One, Ben Tennyson, Dexter, and Larry 3000, whose head is dumped in the Goat's Junk Yard infected zone.

Dexter sends a final message to the heroes stating that he is fine, and that the war is far from over. He explains that between Numbuh 2 and Mandark, the time machine can be repaired to send the player to the Past. You then go to Sector V in order to begin the real adventure.

During their time in the Future, players will receive Guide Missions that will involve repairing the time machine. Once level 4 is reached, the mission Time to Go becomes available, in which the player uses the time machine to go to the past after saying farewell to the NPCs that are there to send them off (however, this mission is now removed completely from Retro ). Just before going to the past, the player must select a guide (choices from Ben, Dexter, Mojo Jojo and Edd) to assist them in their time in the past.

Finally, after stepping foot into the past, the player will arrive in Sector V and will immediatly recieve their next nano mission; that being Blossom.

Retrieved from "https://fusionfall.fandom.com/wiki/The_Future?oldid=106852"
Community content is available under CC-BY-SA unless otherwise noted.