This article is about Tech Square in the past. For the future version see Tech Square (The Future).

Tech Square is one of the many locations in FusionFall, and is the home and workplace of both Dexter and Mandark, and the location of both of their companies headquarters. Dexlabs, on one side, includes Dexter's new laboratory and his parents house on top, which he built for them. Across the square is Mandark Industries, the headquarters of Mandark. In the center is the actual square, a fountain with a shopping zone and Monkey Skyway Agent.

Many important NPCs reside in Tech Square, including Dexter, Computress, and Mandark. A slider-like bus also runs around the perimeter of the square, and is represented by a yellow line. Fusion Max, attempting to steal data from Mandark and Mojo Jojo, has a secret lair in the northern part of the area, as well as Fusion Dee Dee, who is trying to bribe Mandark to give her important information. The Dexbot stealth unit (behind Mandark Industries) still talks about the time travel experiment.

Concept art of the Cyberus. 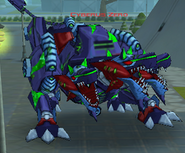 Cyberus sizes from small to large. 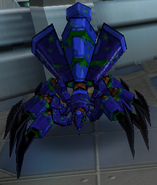 Fountain Between Dexlabs and Mandark Industries