This article is about Sector V in the Future. For the Past version see Sector V.

Sector V is the very first area the character arrives after escaping the destruction of Tech Square (The Future). The gigantic treehouse of Sector V is located in the center of the area, and is accessible only by Jump Pads and Bridges due to Fusion Spawns taking the gravity decelerator (this caused the treehouse to crash to the ground and is now slightly tilted).

In the Future, the memorial at Hero Square located in the north-west part displays holograms of some of the heroes who fought Fuse (that, and the fact that they are the guides in the Past). They are Dexter, Ben, Mojo Jojo, Edd, and Bloo. Bloo is the only hologram character who was not a guide in the past. Not all of the characters shown at Hero Square were lost; Dexter is not seen, but he states that he is fine.

Bloo and Edd were lost to Fuse's army, as confirmed by Eduardo and Eddy respectively. Ben and Mojo Jojo are never mentioned, but one can assume the worst. On top of the statue with the holograms is a floating stone book that says "The hero is great 5 name hero wild talks", which if read separately by each page, it says "The Hero is Great" and "5 name hero wild talks".

NPCs located here include Computress and Numbuh Two. The area is filled with KND Operatives, several with grim pictures of the war's outcome at this point. The Infected Zone, KND Training Area, located in the southwest is relatively new chronologically since it is still under construction in the Past.

Sector V is north of Pokey Oaks North (The Future). It comes originally from Codename: Kids Next Door as the area that the main characters protect. 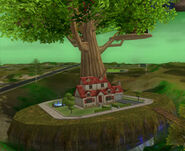 KND Treehouse in the future. 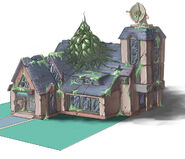 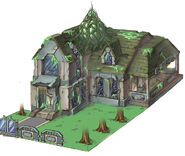 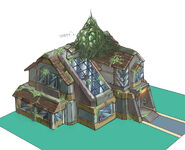 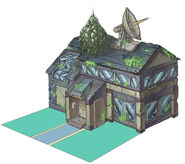