This location is south of Pokey Oaks North, and it is on the way to Genius Grove from there. It is where the Powerpuff Girls live. In one mission Sherri Bird wants the player to wake three kids from here up to go on a cemetery raid. A kid named Finn (not the Finn from Adventure Time) lives in a large house resembling a ski-lodge near the wormhole. Chowder, Shnitzel, and a Shmingerbread House landed here during both Knishmas events in the original game and FusionFall Retro, and later both games' Birthday Bashes took place here, with characters like Albedo, Fred Fredburger, Zak Saturday, and TOM appearing (Note: only half of the characters were in Pokey Oaks South, since the cake was between both of the Pokey Oaks).

Lance, Ilana, and Octus were here, too, as well as the original, non-Fusion Blowfish.

Like Pokey Oaks South (The Future), it is one of two areas that has two Resurrect 'Ems, one in the North towards the border of Pokey Oaks North and one in the South.

In the original game, after the Academy update, players could fight the monster Don Doom here occasionally and anywhere along his route between here and Pokey Oaks North.

In FusionFall Retro, Carl could be found at the comic shop. He was a secret character that give out a level 10 mission that rewarded the player with a rare Blossom Talks-a-Lot action figure.

Also in Retro, during the Ice King Home Invasion event, Chris Waldron's house we edited so he could be seen peaking out of it.

Concept art of Pokey Oaks South. This art indicates that the area may have been closer to Endsville at some point in development. 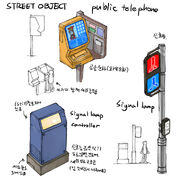