Pokey Oaks is home to Fuse's monsters that are terrorising the residents. Located in the northern part is Pokey Oaks Junior High, the Powerpuff Girls' school, which is now an Infected Zone.

Several Fusions have taken up residence inside the school. Fusion Blossom is heading the operation to steal the sugar, spice, and everything nice and has also stolen some of Blossom's hairbows. Fusion Wilt and his army have been stealing the candy from Foster's and hiding it in his Lair.

Furthermore, Fusion Bubbles is in charge of Fuse's plan to terrorise the residents and terrafuse the entire area. Fusion Mayor is also here to inject the pickle supply with Fusion Matter. Fusion Eddy recently stole some of the real Eddy's jawbreakers and is hiding in the school.

Players could also fight the monster Don Doom here occasionally and anywhere along his route between here and Pokey Oaks South in the original game. He was added there in the Academy update when the future was removed.

The gazebo that borders Pokey Oaks North and South. 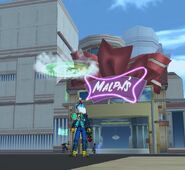 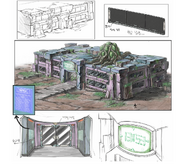