Peach Creek Commons is the area in which the Cul-de-Sac and the Trailer Park are located in The Future. Edd made a cardboard box fort around the Cul-de-Sac that protects the neighborhood from Fuse's monsters due to the Imaginary Energy emanated from the cardboard. However, in The Future, the state of the Cul-de-Sac is as bad as any of the remaining areas. The Park 'n' Flush north of here, home of the Kankers, has been cleared leaving Fusion Monsters roaming the area.

The Great Machine was moved from City Hall to here some time between the past and future. Eduardo can also be found here, being one of the few heroes who has survived up to that point, and due to the destruction of Foster's Home in The Future.

Peach Creek Commons is north of Candy Cove (The Future), west of Peach Creek Estates (The Future) and east of Pokey Oaks North (The Future). It comes originally from Ed, Edd n Eddy as the neighborhood in which the title characters have their suburban adventures.

Concept art of the Dire Hydra. 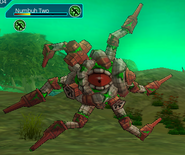 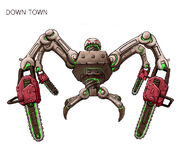 Concept art of the Painsaw.

Painsaw sizes from small to large.

Concept art of the Newsprint Ninja and multiple color variants. 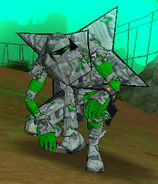