Orchid Bay is an area based off the show, "The Life and Times of Juniper Lee". Juniper Lee is the Te-Xuan-Ze, meaning that she cannot leave Orchid Bay, but in FusionFall, it is hinted she made a deal with Grim to leave the area during Fuses' invasion. Grim and many Candy Pirates are NPCs here, as well as minor characters such as Mario Superior. Finn and Johnny Bravo were found here in the original game. Here, Grim gives some Dexter Guide missions at high levels, averaging Level 17. The very north of the city is a part of Marquee Row.

Orchid Bay has a large dock with many ships which works as the main base here, including a shopping area, Whoosh the Alpha Whale, which can be used to warp to Monkey Foothills, and Grim. Other features of Orchid Bay include a shipping port, a lighthouse, a boardwalk and several buildings. The lighthouse is maintained by the Candy Pirates, actively trying to call in reinforcements from far away lands. This area does not exist in the Future.

There also is a small infected zone called "Cutts and Bruises Skate Park". In addition, the Ice King's palace appears offshore, featuring in the FusionFall Adventures "Ice King Invasion". NPC's in the palace include Finn, Jake, Princess Bubblegum, and the Ice King himself.

Fusion Eduardo also has a secret lair in Orchid Bay, and is in charge of capturing sea animals for experimenting with Fusion Matter. Due to being a Fusion being made out of Imaginary Energy, he can't resist doing at least one good deed. He gets some orange chalk and writes a message, "Big secreto under el boardwalk", on a small chalkboard, breaks it in half; giving one piece to the Master Tentakillers and hiding the other one in the Infected Zone. 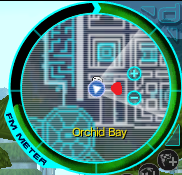