OpenFusion (abbreviated as OF) is an unofficial fan-made open-source reverse-engineered server for the Cartoon Network MMORPG FusionFall. Its purpose is to act as a tool for those who wish to create/host their own FusionFall private server. It also provides two public servers (one with the Future [Original] and another with the Academy) with playable versions of the original FusionFall to those who wish to experience the game. OpenFusion is also being used to create modded versions of the game, such as Retrobution. The server supports many builds of the game from the Future, post Birthday Bash, and Academy versions.

The server was released on Github on August 18th, 2020, and receives occasional updates by its contributors.

On May 10th, 2021, OpenFusion was added to BlueMaxima's Flashpoint. This version of the game is focused on single-player offline play. After the assets for the game are downloaded, the game no longer requires an internet connection to play. Updates for this version of OpenFusion are delayed due to the release cycle of Flashpoint.

Links to OpenFusion's Github pages and socials are provided at the bottom of this page.

NOTE: If you require any assistance installing and playing the game, it's best to go to the tech support channel of the projects Discord server.

Display: Max resolution of 1080p. NOTE: Any resolution beyond 1080p will cause the UI to stop scaling and appear small. If you have a display that's over 1080p, it's advised to use the OS settings to turn the resolution down to 1080p before starting the game.

Other: A stable internet connection.

Info on BlueMaxima's Flashpoint requirements and compatibility can be found here, but the above may still apply.

CPunch started the project not long after FusionFall Retro was shut down. He was curious as to whether or not he could get the original FusionFall client functioning in any capacity. On July 30th, 2020, CPunch posted a tweet with a picture of a newly made character going through FusionFall’s tutorial section in a reimplemented version of the original game's client. A couple days later, on August 5th, he tweeted a video of him playing FusionFall with two characters at once using the before mentioned client. This attracted much interest from the games community.

A little under two weeks later, on August 18th, CPunch announced on his twitter that he had released the client on Github under the name OpenFusion, showing a picture of him and four other players playing the game. Not long after, he opened the projects Discord server to the public.

OpenFusion has been updated numerous times in order to re-implement many features of the original FusionFall that were missing upon the server's initial release, in addition to enabling new admin commands that players are able to utilize during play.

Client Update 1.1 was released on September 7th. This added in database functionality, the ability to register an account, save created characters, and some other features such as trading.

On October 20th, a dev released a program that allows FusionFall cache files to be readable in Unity, and then released another program on October 31st which allows people to more easily customize local servers.

On November 8th, a fan-group known as Sunrise Games, who also run private servers for ToonTown Online, announced that they would start their own FusionFall private server using OpenFusion, and would supply any work done on their server to OpenFusion itself. The next day, they released a slightly edited version of OpenFusion called FusionFall Sunrise.

On November 18th, a dev released a launcher for OpenFusion, which allows for game builds to be easily switched between.

In late November, the official OpenFusion twitter account, OpenFusionProject, was launched. It provides occasional updates on the projects development.

On December 3rd, the OpenFusion dev team launched the dexlabs.systems website, a site that allows visitors to view the live locations of players on OpenFusion's public server. Following concerns over privacy, a day later, the team added two new commands that allow users to stop and allow their locations from being displayed on the site.

On December 23rd, Client Update 1.3 was released, bringing the game to an essentially complete state, minus a few small bugs and other needed work. It came with a custom made UI for creating and switching between servers and game builds, as well as adding substantial support for the Academy versions of the game. At the same time, a new version of the dexlabs.systems website, academy.dexlabs.systems, was released to go alongside the new Academy support.

On January 28th, 2021, it was announced via the projects Twitter account that work was being done to port OpenFusion's client to Mac (Intel only, no Apple Silicon) and Linux operating systems. The tweet provided pictures of the program running on both operating systems. It also stated that there was no release date for the ports at this time. Later on, the developers stated that due to technical difficulties, a native port for Mac will likely never happen, but one for Linux is still possible.

On February 5th, the Python script needed to have race rankings work on local servers was released.

On May 10th, OpenFusion was added to BlueMaxima's Flashpoint. This version of the game is focused on single-player offline play. The game can be played completely offline once its assets have been downloaded. Updates for this version of OpenFusion are delayed due to the release cycle of Flashpoint.

On August 18th, in celebration of OpenFusion's one year anniversary, CakeLancelot posted a retrospective about its development on the FusionFall subreddit, which also includes information about the projects possible future.

On September 20th, Client Update 1.4 was released, which resolved an issue where new players couldn't download the assets needed for the game. It also added quality of life features to the server selector, changed how accounts work, added multiple missing elements of the game, and fixed many bugs, among other changes. Its release also included an installer version of the program for those who had issues with running the game via a zip file.

Every once in a while, the developers of OpenFusion will hold an event or sorts, with special content that's temporarily available to players of the public servers.

On October 17th, Pumpkin C.R.A.T.E.s were enabled on the Future public server.

On October 30th, the OpenFusion team, using a Dyno Discord Bot on their Discord server, hinted that something would happen on All Hallows' Eve that would have fans "regular 'gamer' activities... be cut short" and have them be "cut down".

On Halloween of 2020, the OpenFusion development team began hosting a special event on the Future public server. Players were invited to Billy's House in Endsville for a 'pumpkin carving contest'. Upon entering Endsville, the player found that Jerk-O-Lanterns were spawning everywhere, and were hunting them down. They were eventually met by the Weeper, a headless default male avatar, who repeatedly cries. After crying for a while, they summoned a miniature Fusion Blowfish who teleported around and constantly used eruption attacks to harm the player. After defeating the Fusion Blowfish, the Weeper teleported all players that saw them to the Boneyard Infected Zone, where the Weeper revealed its true form as Bad Max. This version of Bad Max, dubbed as Chad Max by the devs, had enhanced abilities, such as the ability to preform multiple eruption attacks in a straight line all at once. If a player was able to defeat Chad Max, they were rewarded with a special in-game cutscene, where a clone of their character appeared and explained that everything they had just experienced was nothing but a dream. After the cutscene was finished, the player was teleported to Galaxy Gardens.

On November 7th, the Halloween 2020 event was ended on the public server, and all the new content, and the Pumpkin C.R.A.T.E.s, were disabled. The content can still be accessed by using the Halloween branch of the program.

On December 12th, an update to the Future public server was released. One of the features of this update was the enabling of Knishmas C.R.A.T.E.s. They were later disabled.

Starting on December 29th and ending on the 31st, an event was held on the Academy public server which temporarily re-added Agent K9 to the game. K9 was at the top of the Sector V treehouse giving out the Cats & Dogs mission (he was invisible due to the lack of model assets for him in the servers build). The items that players needed to collect in the mission were scattered across the map. The newspaper was in Genius Grove near Fusion Dee Dee's lair at Mandark's House. The ball of yarn was at the top of Dexter's airship in the Green Gullet Infected Zone at Green Maw, and the ship was covered in explosive coco eggs. The sack of birdseed was protected by a legion of rouge mandroids in the Construction Site Infected Zone at Morbucks Towers. The beef bone was in the Canopy Infected Zone at the Really Twisted Forest. Players were tasked to find 'Mega Mom', where the bone was via a screenshot from the OpenFusion Discord server. Part of the Infected Zone was patrolled by a large group of Tooties. When players found the place where the screenshot was taken, they were met by an invisible (for the same reason as K9) Strong Defense Turret that needed to be defeated (and it didn't respawn afterwards). After collecting the bone, players went back to Agent K9 to claim their reward, the Top Dog Tee and the Cool Cat Tee in their Courage the Cowardly Dog versions.

Starting on January 8th, 2021, a new event was being held on the Academy public server. It was announced on OpenFusion's Discord server that Providence had assembled to take back Dexter's airship, and that players should join the fight by heading over to Green Gullet and using a dexbot on the ship to warp to the events location. Upon warping to the event location, players arrived in a large fusion lair filled with Tooties. After either fighting or sneaking past them, players were met by Rex leading a static army of Providence soldiers. South of them was a platform where players could fight the Injustice Foe, a boss enemy which was left unused in the original game. Upon its defeat, players could get a wide variety of special items that were not unobtainable otherwise.

On February 26th, it was announced via the OpenFusion Discord server that the Injustice Foe event would conclude next Friday on the fifth of March, and that instructions on how to access its content via a local server would be provided at a later time. The content of the event can be found on Github.

In celebration of FusionFall's 12th anniversary, the OpenFusion team hosted a new public server that replicated the original Birthday Bash. This server was only available for one day.

Starting on December 23rd, Knishmas C.R.A.T.E.s. were enabled on both of the public servers, and were later disabled.

On December 8th, 2020, the then FusionFall Rebirth team held an ARG on OpenFusion's Future public server. If players completed it, they would be granted access to their Discord server. 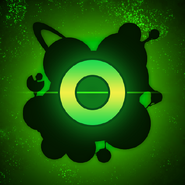 The server selector in the 1.4 version of OpenFusion

The login screen from the original FusionFall, which OpenFusion makes use of.

The Weeper from OpenFusion's Halloween 2020 event 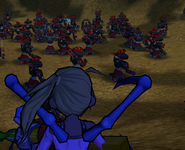 The mandroid army during the OpenFusion Cats & Dogs event

The OpenFusion Tee from Retrobution