This area was inspired by the power plant in the background near Billy's house. Almost the entire area is an Infected Zone, and it is only accessible on foot. Unlike the Goat's Junk Yard Infected Zone, it is not possible to walk around the area other than the entrance. It is strongly recommended that you bring a Recall Nano because you will have to climb all the way back up if you fall down if you don't have one. To get to the exit, you have to make your way into the infected zone, because there's a fence blocking the exit, which is impossible to surmount without a rocket or a jump nano. Johnny Test and Dukey were added to the game in an update. They could be found standing next to the warp gate into the infected zone. Johnny Test gave out only one nano mission, which involves a few stolen scooters from his sisters Susan and Mary, a Mach 9 setting, and a Fusion Johnny Test, whereas Dukey has brought along some items from said sisters' lab to sell. Gear Goons and Ventilators can only be found in the Infected Zone.

Overview of the Nuclear Plant.

Concept art of the Nuclear Plant. 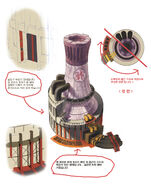