Nowhere is one of the most deserted areas of the FusionFall world as only enemies mostly roam this part of the world. A small base, called the "Creepy Farmhouse" by Hoss, is where Kevin, Courage, and Juniper Lee are located. The house is actually Eustace and Muriel's cabin, from Courage the Cowardly Dog, but in the game, Eustace and Muriel are nowhere to be found. Also located here is a Monkey Skyway Agent and the warp pipe to the Fusion-infested Upper and Lower Catacombs.

Other notable features of this desert include the Easter Island statues randomly found in the south part of the area. This area is based off the Cartoon Network show Courage the Cowardly Dog, and is, in the show, frequently visited by aliens and unspeakable horrors, even before Fuse arrived. Beneath Nowhere live the Mutant Eggplants, and new tenants, the Chickens From Outer Space. The two factions of freaks have been on edge ever since Fusion Spawns had impersonated each species and harassed either side, threatening to start a massive underground war. Judy can be seen in the farther right areas of Nowhere. In the outermost eastern part, is a deserted area that can be walked for some distance; however, there are invisible walls preventing the player from getting past them. 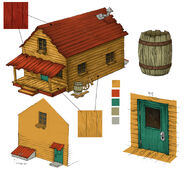 Concept art of the Bagge household.

Concept art of the barn. 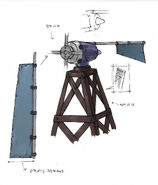 Concept art of the windmill.