The travel hub of the Wilds, this is home to the KND Jungle Outpost. It has a KND S.C.A.M.P.E.R., and a Monkey Skyway Agent. There are other KND operatives stationed here, as well as a shopping district including a Morbucks Savings & Loans. The Magic Tree (from Courage the Cowardly Dog) is the central being of the area. There is a KND Training Area, but it has been turned into an Infected Zone.

As soon as the invasion started, Numbuh 3 and Numbuh 4 were assigned to help protect the Wilds from Fuse's minions. Numbuh 4 had wanted to leave and join the battle in Downtown, but after Numbuh 3 was nearly killed in a Fusion Spawn attack raid he realized he was needed there. Ed managed to escape here from May Kanker's pursuit and actually likes it there. He now proclaims himself King of the Jungle. When the invasion began, Coco got scared and fled into the Wilds and Mac went to find her; eventually both of them managed to hide here. Due to Coco's power to use her eggs against Fuse, Fuse has appointed Fusion Mac, Fusion Numbuh 4, and Fusion Toiletnator to try to capture or destroy her at all costs. They periodically attack Coco and the fortress to carry out their plans.

Zak Saturday and Fiskerton can be found here. They don't have missions except for a nano mission, but they were used in the Mother's Day Event. Zak Saturday is the only son of Drew Saturday and Doc Saturday, and two of their pets that are found in the game are Zon and Fiskerton. One of the Magical Toadstools from the Ice King Invasion event is found here.

Mount Blackhead is home to one of the biggest player trading markets in the game. Players usually stand in front of the Morbucks Savings & Loans and trade rare or unwanted items to other players. Mt. Blackhead is the most popular safe zone amongst high-level players. 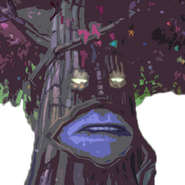 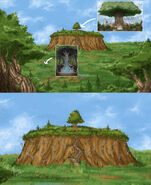