Monkey Foothills is a region of the FusionFall universe known for being in the shadow of Monkey Mountain and the end point of the Twisted River, directly after the Forgotten Falls. Several brigades of Monkey Minion Explorers are found here, scouting this territory on behalf of Mojo Jojo. Tootie, a Fusion Blowfish, can also be found patrolling the area.

Monkey Foothills also has a small camp run by Monkey Minions, including a Skyway Agent and a Nano station. The docks on the coast also have two widely-used transports, the Kumari Admirals and Serpents, providing the only route to the Darklands without a registered S.C.A.M.P.E.R., and Whoosh, the Alpha Whale providing service to Orchid Bay. Tootie can be found in this location (see Tootie)

Concept art of the Dire Ape. 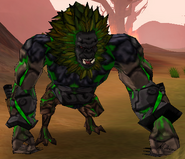