Mojo Jojo is the main antagonist of The Powerpuff Girls, even though he "accidentally" helped Professor Utonium create them when he was a normal lab monkey called "Jojo". He fears Bubbles greatly, as at one time, while in a horrific rage, she defeated him. Mojo, who has an exaggerated opinion of his own intellect, talks in an elaborately complicated and redundant manner, involving frequent repetitions, to the point of not making any coherent sense.

Before the invasion, during a heated battle with the Powerpuff Girls, Mojo Jojo knocked Buttercup into the sea, thus causing her amnesia and disappearance, which he harbors a surprising amount of guilt over. He also seems to have controlled Monkey Mountain before the Fusion attack, as several giant statues of Mojo are to be found in ruins there.

In the Manga, he was the first to see Planet Fusion nearing Earth through his telescope. In response, he and his Monkey Minions went to investigate and conquer the planet, leaving his volcano base defenseless against the intrusion of Blossom, Bubbles, Ben Tennyson, and Numbuh Two when they came to get a part Mojo had stolen to use for Dexter's Electro Pulse Cannon. Planet Fusion made short work of Mojo's army, and sent them hurtling back towards Earth.

Mojo's Monkey Minions repeatedly say that they haven't seen Mojo in days. This likely means he's been killed in battle or gone into hiding. A hologram of Mojo can be seen at Sector V (The Future), along with Ben Tennyson, Dexter, Edd, and Bloo. It could be because he is a guide, or because he provided the Monkey Skyway Agents to assist the heroes.

In the Past, he can be found at his Volcano. As the war with Fuse heated up, Mojo Jojo agreed to join forces with the heroes to battle the Fusion forces. Mojo Jojo is said to have a strong rivalry with close-by villains Mandark and Vilgax.

He serves as one of the four guides players can work for and has even put his minions to work towards finding Buttercup and serving as Monkey Skyway Agents who help players move throughout the world. Secretly however, Mojo has come up with a plot to combine the power of Fusion Matter, his Monkey Minions, and his own brand of Chemical X, to create an army of superpowered monkey minions; and he has enlisted the help of the Hero to achieve his goal. Little does Mojo know that the Hero is actually spying on him on the behalf of Dexter and Mandark. When a major part of Mojo Jojo's plan, which involved dumping his Chemical X formula into the Forgotten Falls, went into action, Mandy and the Hero sabotaged the dump by hypnotizing two of Mojo's Monkey Minions into ruining their master's plans. When Mojo discovers that Mandy has foiled his plot, he sends the Hero to exact his revenge on her, which the hero doesn't.

There is a set based off of his monkey minions that can be obtained by completing Mojo's guide missions. There is also a jetbike and glider based on his minions.

In FusionFall Heroes, Mojo has personally joined the fight, armed with his blaster. His fighting style uniquely consists of a mixture between close and long range attacks. The different versions of Mojo in the game are listed below. 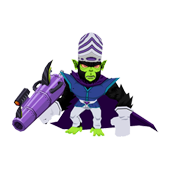 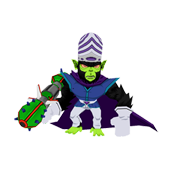 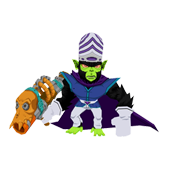 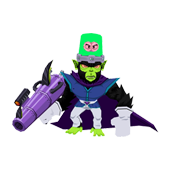 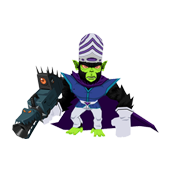 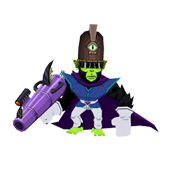 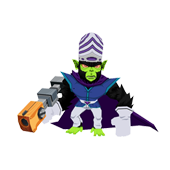 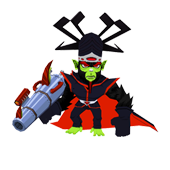 Mojo Jojo as an enemy

Mojo delivering a speech to his Monkey Minions

Mojo Jojo's hologram at Hero's Square in the Future

Mojo Jojo with other villains