Habitat Homes is a level 12 combat zone, and is based off of the Cartoon Network series, My Gym Partner's a Monkey. Many of Mojo Jojo's Monkey Minions attend the public school of Charles Darwin Middle School. Unfortunately, the school has been turned into an Infected Zone, and Motorillas roam the neighborhood's streets. To remedy this situation, the Imaginary Friends at Foster's Home made Re:Fuse posters, and pasted them to the walls of homes and shops with Imaginary paint. The Imaginary paint had the beneficial effect of calming down the Fusion monsters. To combat the loss in productivity, Fusion Father paid Billy to cover the Re:Fuse posters in Fusion paint, causing the monsters to grow wild and destructive. After the Hero reapplied the Imaginary paint, the monsters calmed down again. Fusion Numbuh Three is also trying to assemble an army of Motorillas here. For the Mother's Day event Jeff was found here looking for the Blowfish egg after Billy was kicking it around.

In his quest to create the ultimate Monkey Minion, Mojo Jojo collected DNA from the Motorillas terrorizing Habitat Homes in hopes of combining Fusion Matter with his own brand of Chemical X.

As of the game expansion on the 27th of July, Ilana, Octus, and Lance were moved here from Pokey Oaks South, giving the Titan Nano mission "Origin of the Spacies," wherein the player can fight a brand-new Fusion, Fusion Hominid, who may drop Fusion Hominid's C.R.A.T.E, containing a Solomon Hat. 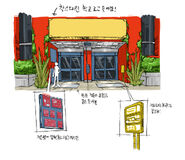