Based off of Megas XLR, Goat's Junk Yard is home to Megas, who has been covered in a Fusion Matter prison to prevent him from prematurely ending the Fusion invasion. Coop tried to free the metal giant with a fusion burner, but Fusion Coop sacrificed himself to make sure that Megas stayed trapped. Before getting into the infected zone, there is a chaos of junk and rubbish all over the place, and also some flying advertisement boards, powered by DexLabs. The Infected Zone (both Past and Future versions) make up most of the area, with the pathway to the entrance where Coop resides in a trailer is. If you go to the back Infected Zone outside, you can find a Scrapper Superior.

In FusionFall Retro, Larry's time pod could be found inside.

Also in Retro, before the Ice King Home Invasion event, the screens at the Junk Yard showed a picture of Gunter, Chris Waldron, and Grandpa Max as a hidden teaser for future updates.

The "Safe Zone" in the junk yard.

Concept art of a catapult that the player would have used to reach Megas. 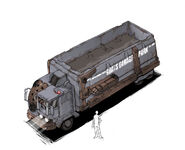 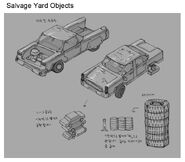 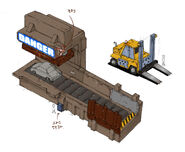 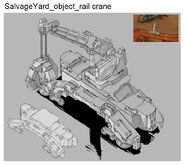 Concept art of the safe zone.