Genius Grove is the location where Dexter once lived. Mandark's House is right across the street from his, but, due to the Fusion invasion, Mandark's home is now an Infected Zone. Fusion Dexter and Computress, along with an army of Fusion Monsters, are trying to steal technology from Dexter's old laboratory using an underground tunnel that connects Dexter's and Mandark's houses. The house is now empty because Dexter moved to Tech Square and built a house for his parents, though Dee Dee lagged behind and is now the only member of their family still living in Genius Grove. Numbuh Five and Professor Utonium have stationed themselves at the house to protect Dexter's old lab. 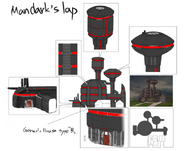