FusionFall: Worlds Collide is a manga co-written by Matthew Schwartz, Content Designer of FusionFall (and creator of the CN Wedgies series Calling Cat-22) and Megas XLR co-creator George Krstic, entitled FusionFall: Worlds Collide was passed out during Comic Con '07. Due to the overwhelming success of the manga, George Krstic was in talks to write a script for a FusionFall feature based on the comic to accompany the game's launch. The manga used to be available on the official website for public viewing and in PDF format for download. The manga serves as a prequel to the events in the game.

In Mojo's Volcano, Mojo Jojo spots something through his telescope. Acting quickly, he calls upon his monkey minions and tells them prepare themselves for conquest. In Sector V, Numbuh Two is trying to make contact with the KND Plutobase. Suddenly, all of the KND bases on Saturn, Jupiter, and Mars go offline. In his laboratory, Computress informs Dexter that an unknown object has entered the Earth's atmosphere and an asteroid zooms past the skylight. Dexter smirks and requests his robotic assistant to prepare the hangar. Around the world, more meteors blast through the skies, passing by the three Eds' neighborhood, Ben Tennyson's campsite, and a floating research station near which Samurai Jack resides. The earth beneath City Hall, Habitat Homes, and Endsville begins to rumble, and meteors crash in Sector V, Foster's Home, and Goat's Junk Yard. The meteor outside of Foster's promptly alerts Bloo and Mac to investigate. From out of the meteorite several alien lifeforms immediately start approaching the front door. Mac ponders if they are new imaginary friends and Bloo goes to confront them. He tells them the home is filled with "smelly gelatinous imaginary friends" and suggests that they come back on Saturday, or never come back at all. The aliens eat his paddle-ball stick and swarm the home.

Dexter arrives in his robotic battle suit and quickly defeats the invaders. After the defeat of the Fusion spawn, Bloo began to gloat, claiming it was he who saved the day and if it hadn't been for him, Dexter wouldn't have been able to stop the Fusions. Mac ignores Bloo and thanks Dexter for the quick save and asks him what those monsters that attacked them were. Ben (Four Arms) arrives and finishes the remaining Fusions. Dexter then points to the Terrafuser, stating that this isn't over.

In Sector V, Numbuh Five and Two try to defend themselves against the Fusion spawns. Overrun, the two plan to retreat, but make a wrong turn into a room full of Fusion spawns. The floor collapses and Numbuh Two and the Fusion spawns fall through. Numbuh Five saves Numbuh Two and the two are then rescued by Blossom and Bubbles. Blossom orders that the two KND agents stay in a safe spot while they destroy the Terrafuser. Numbuh Two then asks Blossom where Buttercup is, when Numbuh Five orders him to be quiet, telling him not to mention "Uttercup-bay" ("Buttercup" in Pig-Latin). Blossom and Bubbles begin to destroy the Terrafuser, until it wraps a tentacle around Bubbles. Dexter arrives and zaps the Fusion device. He climbs out of his suit and tells Blossom, Bubbles, Numbuhs Five and Two that he has detected three Terrafusers and states that nothing works against them because they keep regenerating. Dexter informs the heroes that if they continue to attack with brute force they'll just make things worse. Ben then asks Dexter how they will defeat the Terrafusers if they can't attack them. Mac and Bloo suggest that they use a freeze ray on the Terrafusers, then throw them into the ocean.

The heroes head to City Hall where Fusions are attacking innocent people. There Mac and Bloo still suggest their immature ideas. Dexter then introduces his and Professor Utonium's plan. The Professor picks up a sample of the Fusions and Dexter tells the group that he and the Professor have discovered that the bio-machines are linked to a central structure, and that that structure is powering up for something. On the monitoring screen the three bio-machines are labeled "Terrafuser B," "Terrafuser C," and the main one "Terrafuser Alpha," (whence one may infer that the green space bio-machines are called "Terrafusers"). The Professor states that they don't know what the bio-machine is powering up for, but assures the group that it won't be good. Computress explains that they need to destroy the central bio-machine and adds that they do not have much time. Dexter asserts that, in order to defeat the main Terrafuser, they will have to occupy the other two Terrafusers. Then he and the Professor will hit the main Terrafuser with his new invention, the "Electro Pulse Cannon." The Professor explains that their attack will have to hit all three Terrafusers at the same time or they will simply rebuild themselves. When Ben eagerly announces that he'll take them all on by himself, Dexter vetoes his idea and says that the threat is too tough to take on individually. He adds that they failed before, and that they will fail again unless the coordinate their efforts and team up. With everyone unsure of the idea, Bloo decides that he won't help; Mac forces him to remain and convinces the other heroes to cooperate. Dexter then reveals that the two most important parts for his EPC to work were in Mandark Industries and at Mojo's Volcano. The heroes gasp, but Dexter assures them that they can win and proposes that they split up into two team to retrieve the parts while he and the Professor begin to assemble the EPC. Utonuim tells his daughters to visit Mojo's Volcano for one of the parts, and to bring some help, since Buttercup's whereabouts are unknown and he and everyone else thinks she is dead. The girls choose Numbuh Two and Ben. Dexter orders Numbuh Five to get the other part. When Dee Dee enters, saddened that she is never able to do anything, Dexter eases her sadness and tells her to join Numbuh Five's team, much to her delight.

At Mandark Industries. Numbuh Five, Mac, Bloo, and Dee Dee, after fighting their way through a wave of Mandroids, winging across a lake of alligators, and sliding down a pipe hole, encounter Mandark.

Meanwhile, in Mojo's Volcano Blossom, Bubbles, Numbuh Two, and Ben (Upgrade) enter Mojo's observatory; after easily getting in, they wonder where Mojo went. Ben says he doesn't care and that they should just find the part for the EPC. Back in Mandark Industries, the team tells Mandark of how important it is they get the part. Dee Dee convinces him to cooperate, though he makes one condition: that he come along with them. Back in Mojo's Volcano, Numbuh Two finds the part for the EPC. At that very moment, Fusion spawns enter the volcano and attack the group. Ben transforms into Four Arms to stop them with the help of Blossom. Bubbles grabs Numbuh Two, and the team makes their way out of the volcano. Numbuh Five's strike team regroups on board Dexter's helicarrier; Dexter refuses to work with Mandark and tells him to get off the vessel. Dee Dee rejects that idea, convincing the two to work together. The helicarrier then comes under attack by flying Fusion spawns. Dexter then reminds the Professor that he still needs the other part for the EPC and asks if he has heard any word from the other strike team. Just then, Blossom, Bubbles, Numbuh Two, and Ben (Four Arms) arrive with that part. The Fusion spawns hit the helicarrier hard and Dexter yells thathe doesn't know how many more hits the helicarrier can take. Blossom and Bubbles race outside to counter the attack. Dexter orders the others to help the embattled pair, stating that the EPC will be ready soon, though he is unsure whether they will be ready to hit the Terrafusers in time.

Meanwhile, Coop and Jamie are playing video games. Jamie asks Coop if he hears anything, and Coop replies that he only heard Jamie crying like a little girl after Coop beat him in "Destructo Challenge." Numbuh Two jokes that Mac was right about freeze rays being cool. Ben, annoyed, asks Numbuh Five whether he ever stops talking. Numbuh Fives replies that she wishes so, and then notices that Dexter and the Professor's plan is working.

Mandark, in his own robotic battle suit, flirts with Dee Dee and saves her from the Fusion spawn. He then uses his laser eye ray and zaps the Terrafuser. After this the Terrafuser begins to shut down.

Mandark then tells Dexter that he is clear to fire the EPC. Dexter orders everyone to stand clear while he initiates the weapon. Dexter pushes the button to fire the cannon, but it malfunctions. Computress asks Dexter what they did wrong; he answers that they trusted Mandark.

The device then alerts them that the Terrafuser has activated. Dexter remarks that this is very bad and the Professor concludes that they're just going to have to see what the Terrafuser does. The Terrafuser fires at the sky; in doing so, it hits the helicarrier and causes it to tumble out of orbit. Blossom and Bubbles try to stop it from falling, but it is too heavy for them. Mandark then swings in and saves the carrier in the nick of time. The Professor jumps for joy, hugging Computress (much to her delight) and shouting that he knew Mandark didn't sabotage them. Dexter then realizes that Mandark got the necessary calculations wrong because he was flirting with Dee Dee.

Dexter proceeds to fix the error and fires the cannon at the main Terrafuser. The heroes believe that they have completed their mission and thank each other, but their celebration is interrupted as hundreds of Monkey Minions rain down from the sky. Mojo Jojo crashes into the ground with his minions. Badly hurt, Mojo tries to get up, but Blossom grabs him and prepares to punch him, convinced that he was behind everything that happened. Mac asks why Mojo is there and Dexter wonders what is really going on. Then Planet Fuse arrives. Mandark yells to the others that the Terrafuser is beginning to rebuild itself. Mojo weakly tells them that the light-beam that the Terrafuser emitted was a beacon guiding Planet Fuse to Earth. With this accomplished, Fuse begins his invasion... 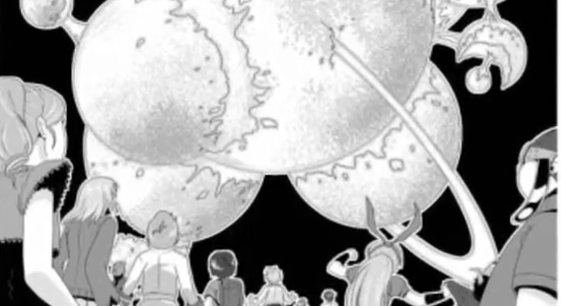 Edd: "I wonder what that could possibly be?"

Ed, Edd, and Eddy watch as the meteor passes their area.

Bloo: "Ok, now I'm mad! These are the rudest Imaginary Friends EVER!"

Mac: "Bloo, I don't think these guys are IMAGINARY, or FRIENDS!"

Retrieved from "https://fusionfall.fandom.com/wiki/FusionFall:_Worlds_Collide?oldid=103632"
Community content is available under CC-BY-SA unless otherwise noted.