This location is based on the show Foster's Home for Imaginary Friends. Fuse's interest in imaginary friends has made this area a prime target for Fusions and Fusion Spawns. Fusion Numbuh Five tried to adopt an imaginary friend, while Fusion Bloo tried to infiltrate the house through the plumbing with help from the Toiletnator.

Bloo tried to defeat his evil counterpart with the Toiletnator's Plunger of Doom, but ended up getting trapped in the Fusion's lair. Fusion Frankie tried to impersonate the real Frankie and tried to trick everyone at Foster's to make it easier for Fuse to get his hands on an imaginary friend for study. Fusion Wilt also tried to attack Foster's, but Eduardo scared him off. You can find one of TOM's C.L.Y.D.E.s here.

While under the control of Fuse, Kevin used a console to transfer Imaginary Energy from the home to Fuse's Lair. Kevin came to his senses later, but the console could not be turned off without harming the imaginary friends.

In the Future, Foster's Home seems to be destroyed with only a big field of Fusion Matter. Which means Fuse managed to destroy the Home along with its Imaginary Friends. (excluding Eduardo, who had managed to escape to the Cul-De-Sac).

Statues in the Foster's garden. 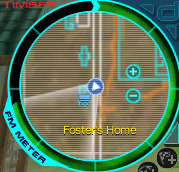 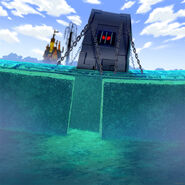 Concept art of the maze with the caged Extremeaur.

The Summerland sub-region with Foster's Home in the background.