City Point is a semi-urban area of Downtown. It houses the Dizzy World Amusement Park, and a small base with several KND agents and Bloo. There is also a giant mural of The Powerpuff Girls, suggesting it is part of Townsville, though it is also suggested to be part of Endsville, Genius Grove, or Foster's Home.

The main part of the zone is the Dizzy World Infected Zone, which features a roller coaster, bumper cars, and many other rides. Grim, Ghostfreak, and Courage are all featured prominently in artwork on the rides, and there are also several Fusions hiding here. Fusion Ace, for example, is in the "Tunnel of Like" and is planning to burn down Dizzy World, Fusion Billy is in the haunted house, and Fusion Bloo is in a circus tent. If you look at the center icon of the Ferris Wheel, you'll notice that it resembles Zombozo, one of Ben Tennyson's worst enemies.

Concept art of the Dynamite Mouse. 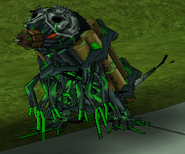