City Hall is an area inspired by The Powerpuff Girls. In the front of City Hall stands the Mayor and Bubbles, as well as some Monkey Skyway Agents. Behind the building lies the Mayor's prized pickle garden and the Great Machine, a giant machine created by both Dexter and Mandark (although Mandark believes that he alone can make the machine perform at its optimum level). The machine holds and synthesizes Nanos and is connected to every Nano Station in the world. For this reason, it is labeled as a target by both Fusions and Fusion Spawns alike. KND operatives are stationed around the Great Machine to counter any such attack.

In the north east part of the area, you can find Thromnambular IV behind the metal building that appears to be a Power Plant guarded by Monkey Minions.

There seems to be mistake on the AI of the game, a respawn point mistake. At the Mayor's mission What the Dill? the player should go to the pickle garden. Usually the garden is filled with Unisickles and Nitrosickles ready to run over him. At Level 15 (the level of the mission) should the player come into the garden armed with Ultra-Rare defenses, about 3-4 Unsickles and 1-2 Nitrosickles may overwhelm and kill him within 5 seconds. Be warned when the player respawns, he will be respawned in Habitat Homes. As one can see by the map, the garden is at the border between City Hall and Habitat Homes.

Concept art of the Heavy Hunter. 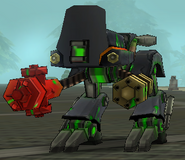 Concept art of the Unisickle.