An area based off of Johnny Bravo. About 1/3 of the area is made up of the beach. There are not many NPCs located here, but you can find a Monkey Minion near the northern house along the road and Candy Pirates that are stationed here to keep an eye out for the reinforcements they have requested for. At the south east corner, you will find Thromnambular V.

In the middle of the beach stands a giant Sand Castle which has become an Infected Zone. When Mojo Jojo gave some Fusion Bananas to some of his Monkey Minions, it caused them to run away to the Sand Castle to Fusion Mojo Jojo's lair, eventually becoming Fusion monsters. Fusion Mandy, who has been trying to convince Grim to help Fuse, is hiding at the back of the castle. While on a mission from Billy to get some Fusion Matter for Runty's living space, Grim tells you to go dump the Fusion Matter at the Sand Castle. He uses it as an excuse to "accidentally" reveal the location of Fusion Mandy's Secret Lair.

On the south part of the beach, a male Candy pirate called Sugarnose looking for help and keeping an constant eye on Fuse`s minions from the beach, and Plumbers who seem to be having a vacation (judging by the fact they are relaxing, not patrolling or fighting) can be found. Cootie could be found on the edges of the beach in the original game. 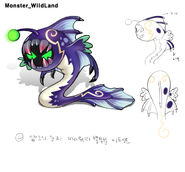 Concept art of the Squish Scaler.